The BRT REA VAYA Louis Botha corridor serves to connect previously disadvantaged areas to wider spaces within the city and the artworks on each station acknowledge and reflect on the value and importance of creative voices within our communities. Throughout each stage of the process, there has been an emphasis on community co-production, and collective participatory design. In essence, the artworks for each station were created by local artists, to speak to their relative contexts.

To date, artworks have been implemented at the following stations: 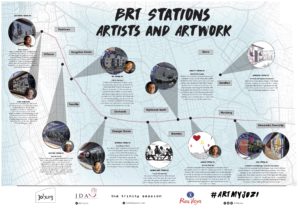 Leading up to this point, there have been a series of open calls for submissions, and numerous multi-disciplinary workshops and exhibitions. In order to have a common interlinking thread between the stations and their respective neighbourhoods, a series of public participatory events were held. This began with an open call in 2017- calling on citizens and creatives to represent their environments, journeys, networks, and dreams.

This call was extended further on the #ArtMyJozi and JDA social media platforms. This was coupled with public creative exchanges and auditions over August and October 2017. A resultant community exhibition was held at the Bus Factory (home of the JDA) from 6-11 October 2017. At this exhibition, visitors were further encouraged to contribute by writing in a comment book and discussing the process with our facilitators.

Local arts networks were also directly contacted to participate in the process, such as the Imbali Visual Literacy Project, Newtown Photo Workshop, Artist Proof Studio, and the Curriculum Development Project. Specific workshops were held with local pre-schools in Bramley and Kids Town, as well as a workshop with 20 artists from Alexandra at the Roving Bantu Kitchen in Brixton. These workshops gathered narratives that describe personal journeys and dreams, with the aim of capturing them in more permanent interventions in the space.

The ArtMyJozi crew used social media as a marketing tool, as well as an unfolding documentary process. The open calls were advertised and followers were encouraged to contribute. Workshops and activations, as well as implementation at the stations were recorded and shared online. There was also a special photography challenge conducted over Instagram, whereby the public could send in their photographs of their familiar environs the best of which to be considered for implementation.

The abovementioned methods of public engagement resulted in 100 submissions, from which a shortlist of works most viable for implementation were identified and considered by the Placemaking Through Art Steering Committee. The chosen artworks were picked based on visual and written themes which connect the corridors; such as journey and transition, identity and home, music / fashion / dance, dreams, structures and landmarks, nature in the city, mapping, as well as history, heritage and contemporary culture. The remaining artworks are accessible through the ArtMyJozi archive.

For instillation, the original artworks were digitised into vector images, and sent to the sandblasting supplier. The supplier produced all vinyl stencils necessary for sandblasting and application of 2K paint. Each station has an artwork (in two sections) at the entrance, installed onto the glass and steel panelling.