In order to gather public contributions and feedback for the mural design, a community exhibition was held at the Orchards Project/ Spark Gallery during April and May 2019. The greater community and key stakeholders were invited to visit the gallery and view the project. They were encouraged to participate by making their mark against the temporary wall.

The gallery was open from 11am-4pm Monday to Saturday, excluding the Easter Weekend. We had facilitators in the gallery who would give visitors a walkabout and engage them in a discussion. All comments and feedback were recorded in a comment book. A daily register of visitors was also taken. All the input from the public over this time was recorded and considered for the final design.

Within this exhibition, a number of activations happened, such as: 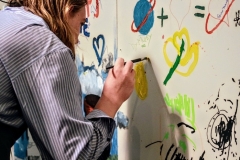 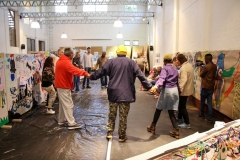 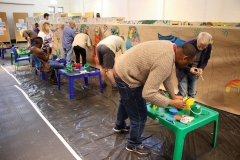 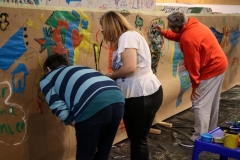 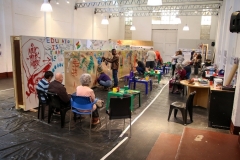 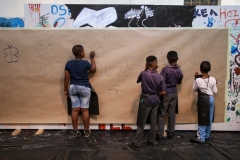 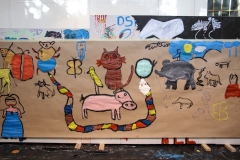 On the 30th April and 2nd May we hosted 2 workshops with the residents of Gateway House Psychiatric Residence. Around 20 residents attended each workshop, plus 3 of their facilitators. The workshops were led by Andrew Lindsay and assisted by the Trinity Session Facilitators.

Each session began with a movement and music exercise, to build trust between the residents and our facilitators, and to get them more comfortable in the space. This was followed by a body mapping exercise. We put up paper across the length of the mock wall, and participants were encouraged to pair up and trace their bodies onto the wall and paint them how they saw fit.

On the 2nd and 3rd of May, we hosted 2 workshops with school children. Each session had 10 participants, aged from 8-13. Again, the workshops were led by Andrew Lindsay and assisted by Trinity Session facilitators.

The younger group began with a physical exercise, where the children were encouraged to think about movement and migration, and how different animals and insects occupy a space. As a result, their murals were more focused on said animals and insects.

The older group also began with a movement session, followed by the body mapping exercise.